November 14, 2019
As has been mentioned previously (probably...when was the last time I posted here?), Bruce loves sports, especially soccer. We have two soccer nets in the backyard, and over the course of the summer, we collectively killed at least 90% of the grass in our backyard. 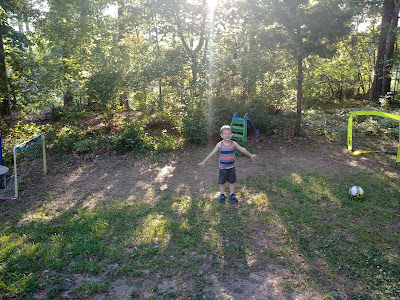 (This was taken at the beginning of the summer. All that grass you see in the picture? It's gone.)

Bruce's old day care had a program called Soccer Shots that you could pay into and give your child a little extra soccer-focused fun once a week. We took advantage of that, but Bruce is now in Kindergarten, where there is no such thing. So we signed him up for a youth soccer program instead, through the closest YMCA to our house. It was a 7 week league and it just ended last weekend.

When I signed Bruce up, one of the questions was something like, "How much experience does your child have with soccer?" The options were Beginner, Intermediate, or Advanced. I guess they were just trying to balance the teams. I put Intermediate, because even though he's been doing Soccer Shots and kicking soccer balls at my crotch in the backyard for the last several months, he had never really done a "league" before. So I put Intermediate. Now that the league is over, I know I definitely should have put Advanced! 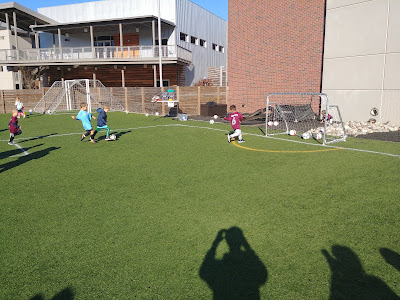 (Bruce, in the jacket, on his way to another goal, despite the best efforts of the red team's top defender.)

Well, let's make one thing clear here, though: Bruce had a definite age advantage. His birthday is in late August, which in the eyes of Durham Public Schools, makes him a kindergartener because he was born before September 1, 2014. But the local YMCA says that because he was born after August 1, 2014, he is still an "Under 5". So if he wasn't the oldest kid in the league, he would have been very close. In youth sports, especially at this age, being a few months older than everyone else is a huge advantage!

It also helps that he wanted to be there. Many of the kids that were in the league...they weren't really into it. Their parents probably just took the initative to sign them up. Which is fine, but I'd say less than half the kids there were all that interested in playing. Usually, 4 or 5 kids would play at a time...or at least that would be the plan. Sometimes kids would just walk off the field and go wherever. That was not a problem with Bruce. (Note that the league probably included some 3 year olds as well as 4 year olds, plus those like Bruce that just turned 5 after the age cutoff.)

Bruce was one of about three or four kids that were clearly the best players. He may not have been the fastest, but he had the best ball control of all of the fast kids. I don't have an exact count of how many goals he scored because I didn't take him every week, but I believe he averaged more than 3 goals per game (Well, depending on whether you credit him for deflections, or if you count those as "own goals" by the other team. Bruce counted those as goals for himself. Sure, buddy! You can claim those as your goals too.) Perhaps more impressively, he would actually go back and play defense when appropriate. I've been teaching him defense in the backyard - basically, how to run backwards and stay between the ball and the goal.

Bruce is a bit advanced for this league, perhaps. But is that just because of the age thing, or is he really that good? I'd say it's a combination of the two. Either way, we need to find a new league for the Spring, since the YMCA Spring league - which doesn't start for another 4½ months, mind you - had already filled up before the Fall league had even ended, and I missed out. Whoops! Fortunately, there are plenty of youth soccer options out there. I'm looking at another with a group called "i9 Sports" that is also on the less competitive side, but has a different age cutoff and combines 5s and 6s. So instead of being the oldest, he'll be on the younger side of average. Then if he dominates that league as well...time to get even more competitive? I mean, soccer is one of the few sports where you can succeed professionally if you're shorter than 5'10". (Also curling, but we'll get there some day.) We know Bruce is probably going to end up being 5'9" or shorter, based on his current stature (a bit short for his age) and genetics. That disqualifies him from like 90% of pro sports before we even get started. But soccer? Well...before we get ahead of ourselves, let's make sure he keeps having fun first and foremost.